Enrollment Update: Enrollment at Isbell Elementary is at capacity for the campus. Students who live in the Isbell attendance zone and are entering kindergarten in the 2022-23 school year will attend Isbell. Any new students who live in the Isbell zone and are entering grades 1-5 in the 2022-23 school year will attend Talley Elementary. Busing will be provided at no cost from Isbell Elementary to Talley Elementary. New families who have both a kindergarten student and older sibling(s) in grades 1-5 may opt to have both children attend Talley Elementary, with transportation provided for both students. To finalize the enrollment process, parents of new students should contact Talley Elementary directly. 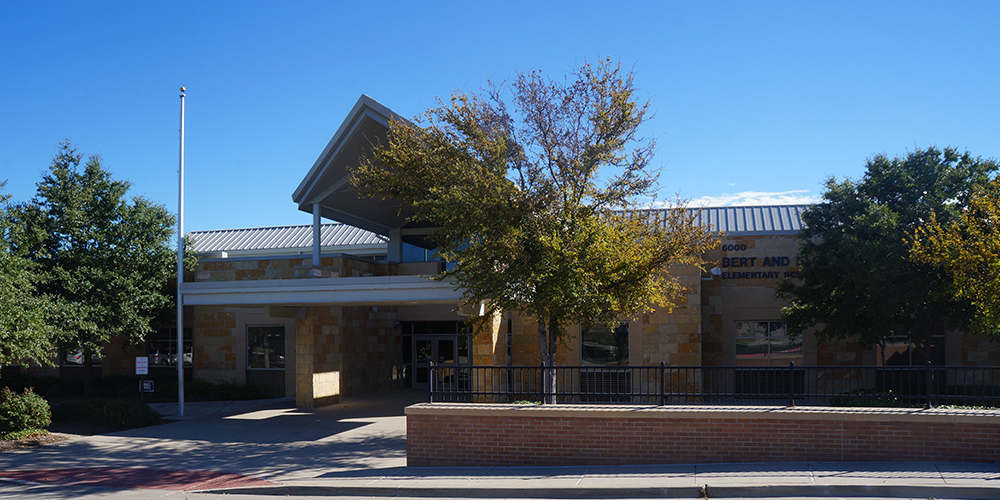 Bert Isbell grew up in Pampa, Texas, and began his teaching career in Skellytown. There, in 1949, he met Eloise, another first-year teacher, and they married the following summer. Bert later took a job in Valley View, coaching football and boys’ basketball and baseball. While there, he finished his master’s degree at North Texas State before taking a job in Celina as a coach and junior high principal.

In 1961, they moved to Frisco and Bert became manager of the Triangle Lumberyard owned by Bill Christie. But Bert found that he missed teaching and joined Frisco ISD in 1962 as a sixth-grade teacher, assistant coach and bus driver.

When voters approved the first bond election to build Acker Elementary, Bert became its first principal – actually the first elementary principal ever in Frisco ISD – when it opened in 1963. He held this position for 19 years before retiring in 1982, making him one of the longest-serving administrators in FISD history.

Eloise returned to teaching in 1965, and obtained her librarian certification at North Texas State. She became the librarian for the Frisco schools in 1968, a position she held for 18 years before retiring in 1986.

Between the two of them, they accumulated 54 years of experience as educators – 38 of those serving FISD students. The District is thankful for their legacy.