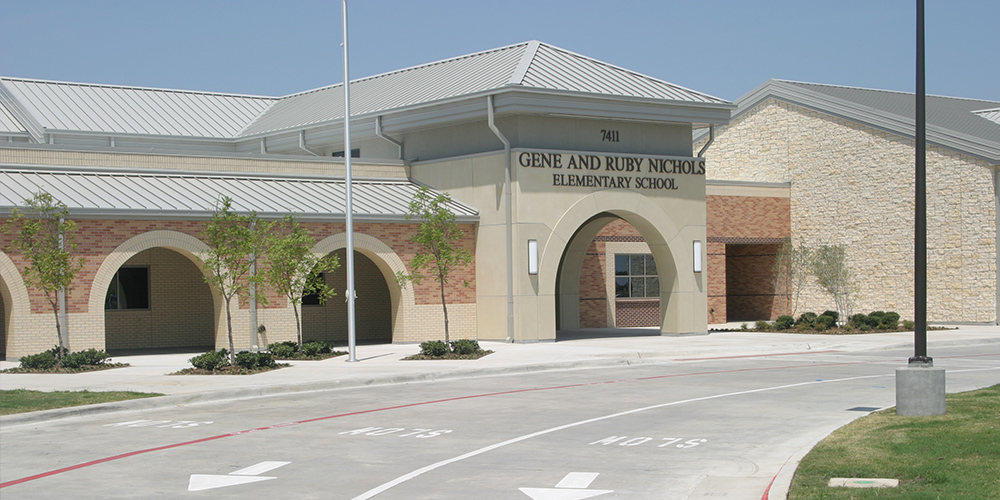 Gene and Ruby Nichols were both raised in families that valued education and school involvement. Ruby’s dad, W.F. Reynolds, graduated from Frisco High School and served on the board of the Robertson School, very near where Nichols Elementary is built, and served an additional year after Robertson became part of Frisco ISD. Gene’s dad, Frank, was a Frisco football coach.

Gene and Ruby were 1951 graduates of Frisco High and lifetime fans and supporters of FISD.

Ruby loved life and people. Her quick wit and big heart were wonderful skills she put to good use when she worked as the high school principal’s secretary for many years. She loved being around students and was also very active when her kids were in school, from PTA and band boosters, to float building and attending sporting events. Ruby was a founding member of the Frisco Heritage Association and received the Chamber of Commerce Spirit of Frisco Award in 2001.

Gene’s passion and area of volunteer interest was Frisco School sports. It didn’t matter what sport, he loved to support the kids. He ran the game clock for Frisco football games for 42 years - from 1952 until 1994. When he first started, he was climbing a pole to the old crow’s nest, which was a small steel platform attached to a pole on the side of the field. In retirement years, he served as a school crossing guard at Rogers Elementary. Known as Gene Pop to most after he had grandkids, he always had gum, candy or a little money to give to kids he would see in the community or at sporting events.