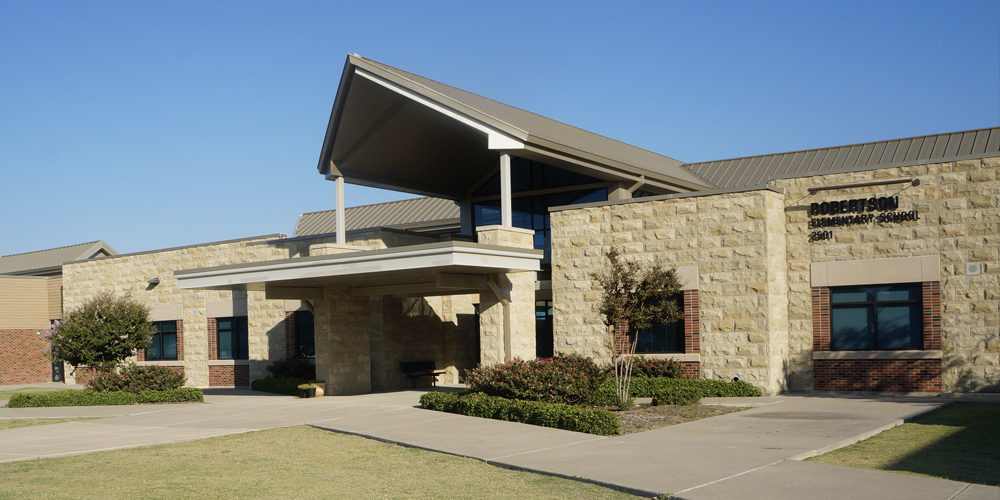 Before the Frisco ISD began more than 100 years ago, the children of pioneer families received their education in one- and two-room schoolhouses throughout this area. There were up to 12 schools at any given time, and many were established in the late 1800s and some were operational up until the late 40s for grade school. The earliest school established was the Robertson School around the year 1850; it was located about three miles west of Frisco at the intersection of what is now Main Street and Twin Falls Drive. At some point the school closed, so James and Mary Robertson hired a teacher for their children and invited other children in the community to attend classes in their home.

In 1884, James’ brother A.W. Robertson sold a plot of land smaller than the size of a football field to the Trustees of the Denton County School District 48 for $1 and a second school was built. In 1909, the second school and land were sold and a new plot was purchased from J. R. Newman for $20. A new two-room frame building was built with a wood-burning heater in each room. The most students who ever attended at one time occurred in 1930 when there were approximately 30 elementary students with two teachers. The school was in operation until 1935 when students were funneled to Frisco ISD.

A story recorded by former student Noah White brings Hollywood to life at the Robertson School. He recounted that one day a group of men rode up to water their horses. The teacher told the students to not look out the window and keep working on their studies. When the horseman rode away, she told the children the riders had been the notorious Jesse James Gang.

Schools then were as they are now: the hub of the community. Robertson School was the center of the farming community and was the site for school plays and box suppers. It was the primary school for many of Frisco’s oldest families, including Frisco Mayor J.C. Grant and the Newman children, Stark and Smotherman children. Genevieve “Sis” Kerley has often recounted how during bad weather, the Newman family would take in those who couldn’t make it home, providing supper and a place to sleep until the muddy roads were passable again. Children brought their lunch to school wrapped in newspaper or in pails, they washed with lye soap and many rode horses to school. Times were simpler, but the importance of an education was still a driving force. Naming an elementary school after this early settler school pays tribute to those pioneer days of education in this area.