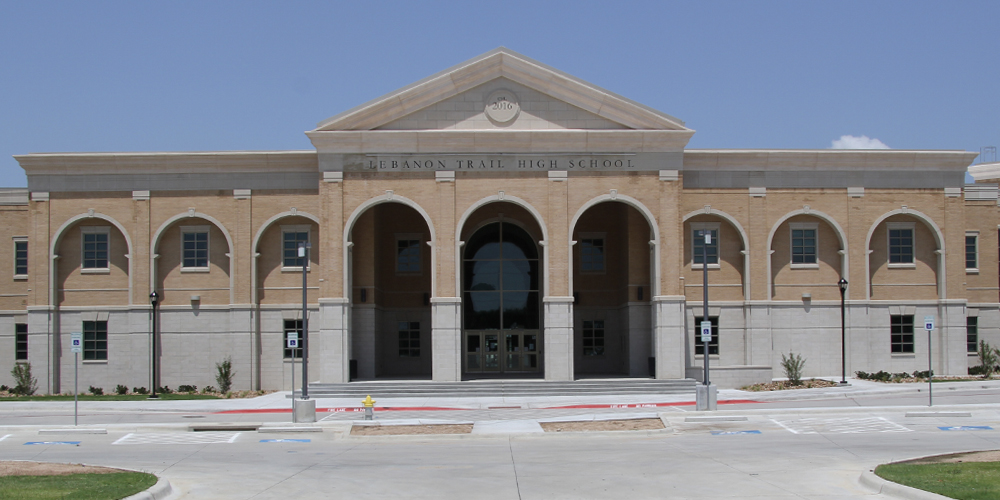 Lebanon Trail High School sits in the heart of what was once Lebanon, a community that predates Frisco by about 50 years. Before Lebanon grew and settlers moved to Texas looking for land and opportunity, Native Americans hunted and got water in the area along the trail. It was not long until cattle drives would pass through. Lebanon straddled the old Shawnee Trail, also known as the Preston Ridge or Preston Trail, and was a place on the trail for those passing through to stop and rest, get a meal and refresh along the cattle drive. Later, as more farmers settled the land, the community would boast its own school, cotton gin, dry goods store, churches, taverns, a post office, a shoe cobbler and three ladies who had their own business selling hats and accessories.

After the railroad was established north of Lebanon at what is now Frisco, many Lebanon residents rolled their homes and businesses on logs pulled by steam engines the three miles to the new town. Other families such as the Clarks, Smiths, Rasors, Bolins, Marions, Kerleys, Haggards, Bristows, Hoopers, Duncans, Wades and Christies chose to stay in the area. Though many businesses moved away, Lebanon School continued.

The families of the area sent their children to Lebanon School until it closed in 1947. The children of the Lebanon community became Frisco ISD students and have contributed much to the success of FISD over the years. Memories of Lebanon may be found throughout Frisco. The road itself keeps the memory of Lebanon alive. Located at the Frisco Heritage Center is the Crozier-Covington House that once stood off of Preston Road to the west, and the chapel in the center was the Lebanon Baptist Church where many older Frisco residents attended for years.

Lebanon Trail High School stands as an acknowledgement to the rich history of the community and to those who once lived and farmed in Lebanon along the trail that started it all.