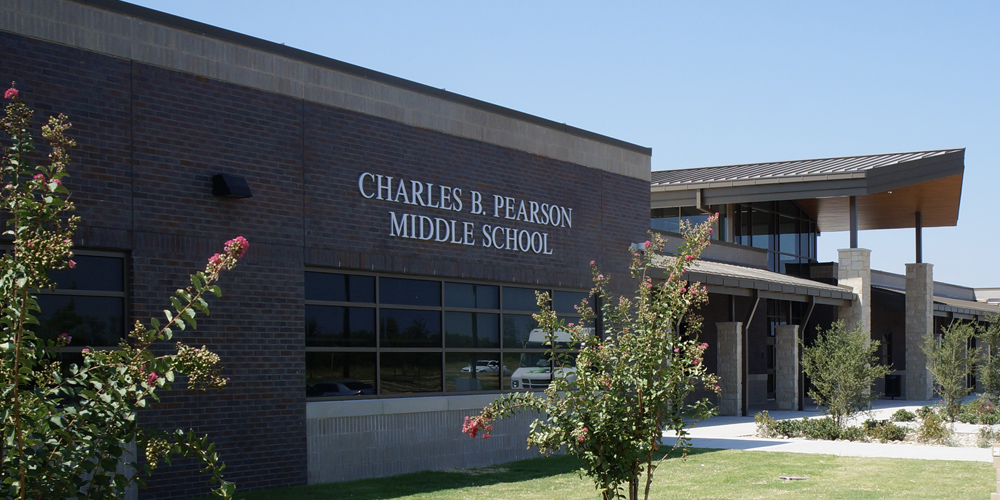 Charles Bishop Pearson served as a member of the Frisco ISD Board of Trustees from 1960-72. He quickly became board president in his first year, a position he held for 10 years. Charlie -- or C.B., as he is known to many -- was born in the Frisco area in a house located where Centennial High School now stands. He began his education at Frisco, but graduated from Plano where his sharecropper parents moved when looking for work during the Great Depression. After graduating from high school, he began working on a degree in agriculture at Texas A&M College (now University) and served as a member of the Corps of Cadets, before his education was interrupted by WWII.

In 1943, Charles left A&M and received a commission as an officer in the United States Marine Corps. He trained as an artillery spotter for the Navy, and was one of the first men ashore when Marines landed on Okinawa. After the island was secured, his superiors selected him to lead the first contingent of Marines to sail into Tokyo Bay to validate the Japanese surrender.

Pearson completed his degree in Agriculture Science from Texas A&M in 1946. After graduation, he returned to the Frisco area to farm and was recruited to teach Vocational Agriculture at Frisco High School. He married Emily Anne Kennedy in 1947 and moved with his family from Plano to Frisco to start a dairy in 1958.

Upon his return to Frisco, he was quickly elected to the Frisco school board and is known for successfully leading the school board and voters to make important decisions to expand and improve the small school district. Notable achievements included passing a bond to build Z.T. Acker Elementary, supporting a school band program and the vote to desegregate.

In 1979, the Pearson family established a scholarship in honor of their youngest daughter, an A&M graduate, who died in a car accident. As a result, the Libby Louise Pearson Scholarship continues to be awarded annually to a deserving Frisco High School senior attending Texas A&M University. The Pearsons retired from actively running the dairy in 1987, but remained active through volunteerism in the community and across several continents during retirement.