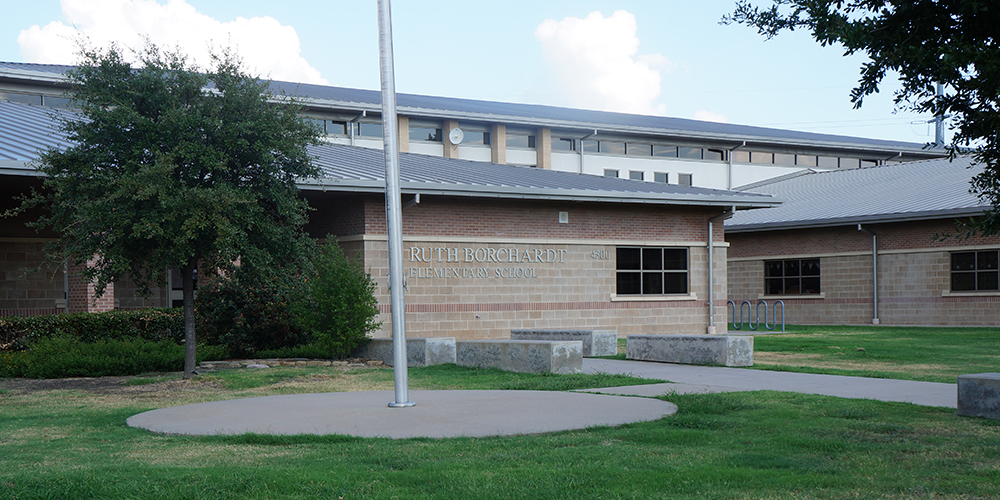 Ruth McCormick Borchardt was born in 1906 in an area that is now part of The Colony. She was a sickly baby and a doctor suggested feeding her milk drained from bowls of a new cereal at the time – Grape Nuts. The family also moved to West Texas to change climates for her mother’s health. The Grape Nuts and West Texas did the trick.

The family moved back to Frisco in 1918. Ruth attended sixth grade at Erudia, the one-teacher school located just west of town. In seventh grade, she attended school in Frisco, graduating from Frisco High School in 1924 with a class of 13 students.

Ruth attended Texas Women’s College, which is now Texas Wesleyan. After a year, she received her temporary teaching certificate and began teaching at Hackberry School – a three-room country schoolhouse in the Frisco-Little Elm area. There, she taught fourth, fifth and sixth grades and attended North Texas State in the summers to finish her degree. While still finishing her schooling, she taught in Frisco and then went back to Hackberry, which had consolidated with Little Elm, to teach and be principal of the elementary school.

In 1930, she married. Then in 1932, during the Depression, it was decided that families should only have one breadwinner, so she lost her job. She went to Dallas and approached Draughon's Business College, offering to teach spelling and English in exchange for being allowed to take typing. She took shorthand, also, and was then offered a job to teach the course, something she did for 12 years.

When her son, future Frisco Fire Chief Mack Borchardt, began first grade, she decided to go back to teaching locally. There was a teacher shortage, and she felt it was a good time to get back in the profession – choosing Frisco over Little Elm because the schools had indoor plumbing. She taught middle school and then moved up to high school mathematics when Mack entered middle school. Ruth taught for 21 more years, retiring in 1976. She substitute taught for 10 additional years upon retirement.

Ruth never stopped learning or sharing knowledge and was considered a leading authority on history in the area until she passed away in 2008 at the age of 102.